Puneet & Kirsteen met us in a coffee shop in Canterbury to bring their English Wedding Elopement dream to reality. The couple from Toronto, Canada had decided that the location where they had both just graduated from was to be the ideal place to be married.

They flew in months later with a small group of family who were also going to Puneet & Kirsteen’s graduation in Canterbury Cathedral.

On the day of the Elopement, we arrived at the house and helped Puneet get ready. After an hour we met up at the location they had chosen for a first look; the stunning Kent Downs. The scene was set for the wedding elopement of the year to begin! Kirsteen set off across the filed and Puneet was looking worried as he did not want to disappoint his wife to be! Of course, he did not and the couple had a moment together as the stunning Puneet smiled from cheek to cheek.

The scene was set for the rest of the day and we filmed the ceremony in Canterbury Registry office. After they headed down for a tea party on top of Whitstable castle and filmed the couple relaxing with the family.

So photos were taken in the gardens and it was our intention to film Puneet & Kirsteen as part of this Canterbury Elopement in the city itself but unfortunately, the weather has changed.

We offered to come back the following day to finish the elopement film in Canterbury city centre and spent 10 minutes asking questions on camera individually. After we had an hour of fun in the city taking some couple shots and seeing the sights.

These guys were incredible and so relaxed, it was a day and a wedding elopement we will never forget. 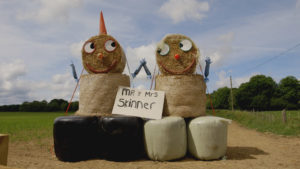 Welcome to our Journal, here you will be able to watch some of our wedding videography. In addition, find tips to make your day go even better.

Now and then you can find out how we film with behind the scenes access to how we work in the wedding film industry.

'10 reasons why I want to marry you'. Amazing to c

It was fun to work on this 'Hopeless Romantics in